We produced video scenes for the EE Fully Clothed Wetlook video tapes / Dvd’s during the years 1996-2003, and a few more scenes more recently.

Many of these scenes have been released now, and are available in the video store at www.eewetlookproductions.com and in the Old Vidown Archives Store.

This new downloadstore contains scenes that were left over.. and haven’t been published anywhere yet! In many cases, also photos are added.
Currently, the sets can be paid for with PayPal.
There are only a few sets available now, but we will add more sets as soon as our time permits. 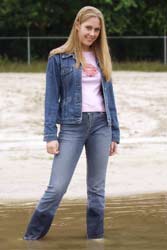 This set has been produced for the EE Fully Clothed Wetlook videotapes, but has never been published yet.
Price: € 10.00 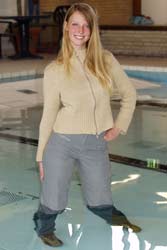 079 Anita
13:36 min. movie (1024x768 pixels, MP4) and 11 images (of which 5 still dry) of Anita in a pool in a cardigan over a white tshirt, gray pants and shoes, produced in 2003.
She slowly goes into the pool and stretches herself on an air mattress. In the second half of the set, she takes her cardigan off.
This set has been produced for the EE Fully Clothed Wetlook videotapes, but has never been published yet.
Price: € 10.00